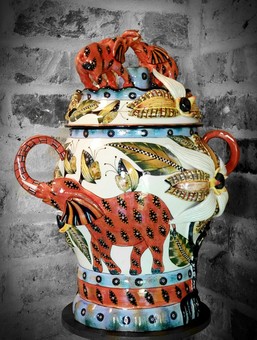 Original piece, one off - not repeated.An early Wiseman piece from 2006..joined Ardmore in 2005 and became Ardmore's top selling artist at Christie's London sale in 2007. Fée Halstead quotes "..Wiseman has consistently created masterworks for all our Ardmore exhibitions, locally and internationally. His pieces are highly prized collectables." Elephant Tureen with matching lid moulded by Sabelo and painted by Wiseman, 26th October 2006, 44cm high. Comes with aaa collection cerificate #10413 signed by Fée Halsted-Berning.In excellent condition. Lots of images taken with many more on a Wetransfer board, link below;https://we.tl/b-6w6HLRhhDGVery few substantial quality Ardmore pieces on the open market or in galleries..if looking at this you know they get snapped up very quickly.An Elephant Urn painted by Wiseman in a similar style/colours sold at Christie's in 2007 for £2400 (estimate £2,500-3,000). Additional notes were that the piece had some minor damage..this one is pristine. Awareness and Interest with collectors of Ardmore Ceramics has increased considerably since then.Pieces are in museums worldwide, presented as gifts to heads of state..in both Buckingham Palace and The White House. Please check images, as they form part of the description. Any questions, let me know. Re shipping, please get in touch beforehand in order that can request an estimate to your destination. About ARDMORE;Ardmore Ceramic Art was established in 1985 through a special collaboration between Fée Halsted and Bonnie Ntshalintshali. From diverse backgrounds, they recognised in each other the true artistic skill to envision, create, produce and sell unique ceramic pieces. Their exuberant exotic style has been both locally and internationally recognised and Ardmore’s pieces have found their home in numerous art collections around the world. The studio has stayed close to its KZN roots and has trained and developed local artists, changing their lives.Ardmore’s highly collectable pieces are born in 3 main studios, each full of people carefully creating their current masterpiece. Each piece is conceptualised by the team, brainstorming and sharing. Inspiration comes from African proverbs, photographs of creatures and sheer imagination!In the first studio, the artists carefully mould the structures with clay, adding all the embellishments. In the second, the details are added – tiny markings, patterns, textures and other fine details. In the third, the pieces are painted – often using the wildest and brightest colours imaginable.This means that along the way, from conception to finished product, each piece passes between many hands, and thus each creation really is a team effort, The sense of comaraderie and love among the team is palpable – a combination of gentle, quiet, passionate creativity. You can feel this in each piece, brings joy to any room.