Antique A Massive and Magnificent Pair of Chinese Kylins | ANTIQUES.CO.UK |

a massive and magnificent pair of chinese kylins 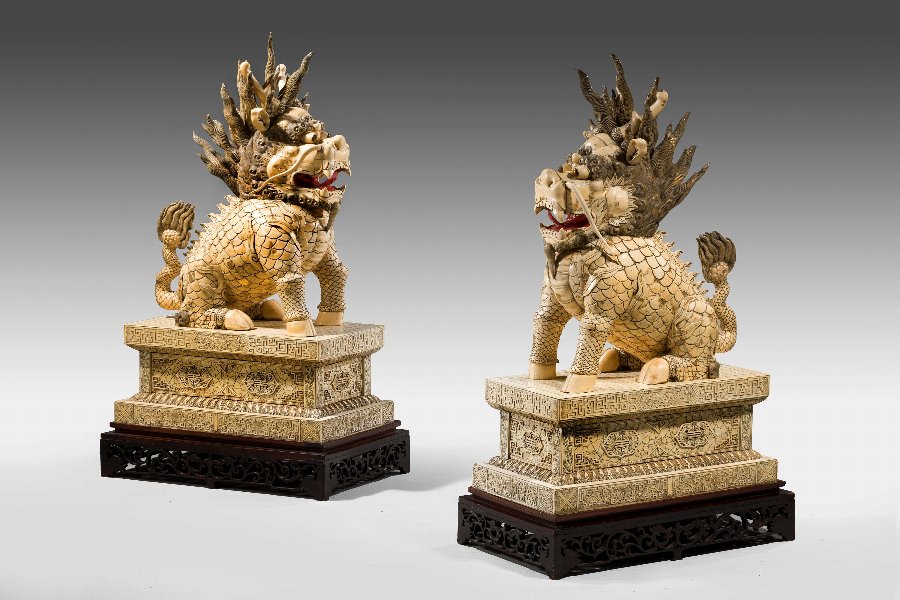 A massive and magnificent pair of Chinese Kylins, with complex carved and tinted details resting upon rectangular bases with blind fret carving and insignia of exceptional quality and condition.

The Kylin is an animal in ancient Chinese mythology. It is somewhat like a deer, with horns on the head and scales over the body. Its tail is like that of an ox's. The Kylin is said to be an animal of longevity that could live for 2,000 years. It is also believed that the beast could spit fire and roar like thunder. The Kylin is one of the "Four Divine Creatures", the other three being the phoenix, the turtle and the dragon. In ancient times, it was regarded as a celestial animal, a benevolent animal, the mount for god and a symbol of auspiciousness. Of all animals, the Kylin was ranked second only to the dragon.
The Kylin is a carrier of profound cultural connotations. In ancient Chinese culture, there are lots of legends about the relations between Kylin and emperors. It was widely believed that the animal would convey the will of Heaven and therefore dictate the rise and fall of a dynasty. In folk culture, there's a saying of "the Kylin bringing a child". Common people regard the animal as a divine creature bringing children to them. It is said that Confucius was brought by a kylin. The animal is also used to describe a brilliantly talented person.
In traditional Chinese folk customs, various ornaments bearing Kylin images are made and given to children as a talisman that could bring luck and protection. The images of the Kylin can still be found today. The most famous ones are the auspicious guarding creatures in the imperial mausoleums of the Southern Dynasty located in Qixia Town of Nanjing. The images of these creatures are derived from Kylins.
Circa: 1900Item Reference = 5359