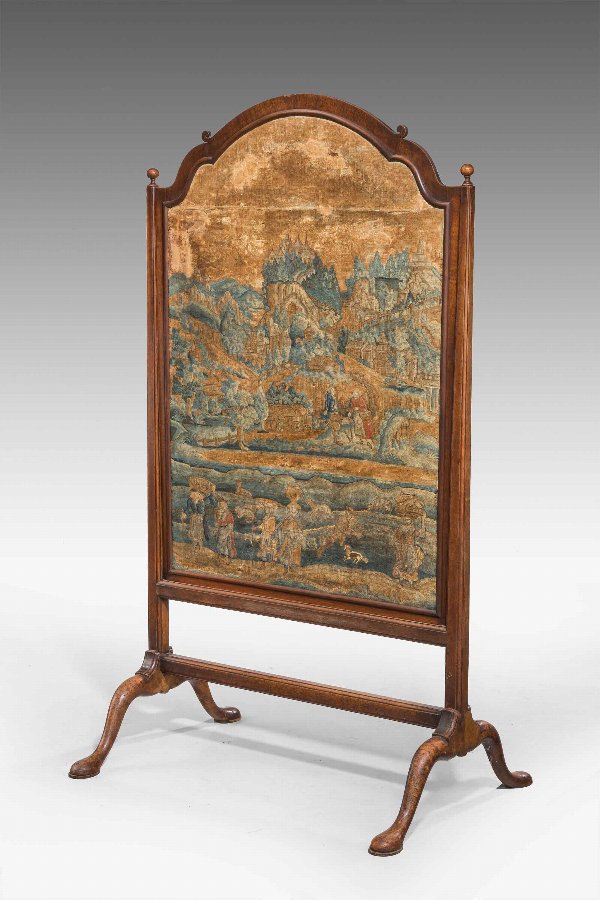 A George I period walnut cheval screen containing an interesting unfinished panel of petit point, with scenes of buildings in a mountainous landscape and country people, the simple elegant frame with an arched cresting and trestle legs joined by a moulded stretcher.

Sothebys Label Showing Property of Mrs Derek Fitzgerald, Removed from Heathfield Park SussexHeathfield Park is an English country house and walled park in the village of Old Heathfield in East Sussex. It is privately owned. Originally called Bayley Park, the mansion was begun by James Plummer in 1677 and continued by Raymond Blackmore in the early eighteenth century. It was altered and enlarged in 1766 by Robert (later Sir Robert) Taylor for General George Augustus Eliott (created Lord Heathfield in 1787), who owned the house until his death in 1790. It was renamed Heathfield Park after him in 1791 by his successor Francis Newbery, son of the publisher John Newbery; Newbery hired Humphrey Repton to landscape the park. From 1819 to 1890, Heathfield Park was the seat of the baronets of the Blunt family. In 1895 it was remodeled in Georgian Revival style, brick facing being substituted for stucco, and the south-east wing being added, by Sir Reginald Blomfield for the Art patron William Cleverley Alexander. Alexander, who owned Aubrey House in London, died when he fell down the basement stairs of the house in 1916.RRCirca = 1720Item Reference 6481Height = 56.00 inches
Width = 31.00 inches
Condition = Excellent Windsor House Category = Screens