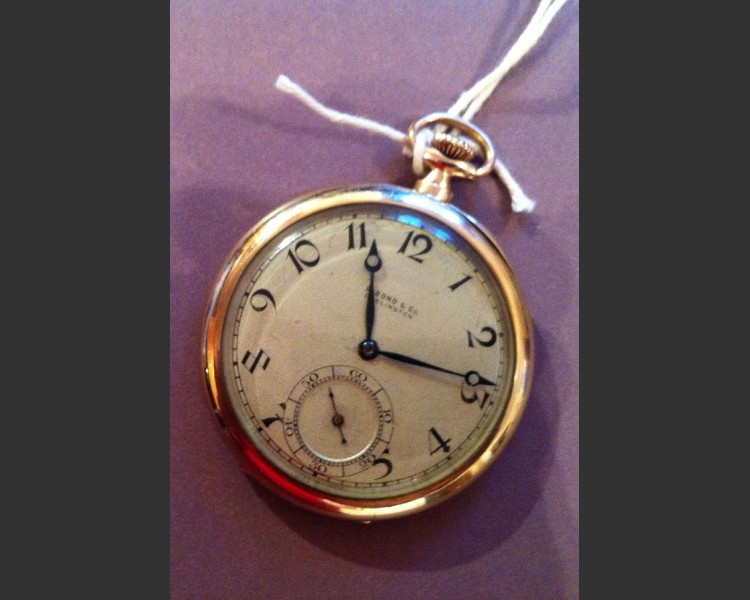 This slim pocket watch is in full working order. Its retailer is marked to the front. R Bond & Co often retailed good quality watches from there premises in Darlington. This watch falls into this category as the case is marked as Rolex. However the movement does not have any similar markings to it. The front face of the watch is plain and simple. It bears the retailers name. The numbers to the sides appear to be italic in nature, especially the number 8. The crown shows only slight wear, which appears to be commensurate with age. The loop does not appear to have had any restoration or repair. The reverse cover of the watch has a simple design of plain straight lines. There is a cartouche of an oval shape to the centre bottom. This is vacant and has never been inscribed.

The watch is very slim, only approx 8mm in depth. There does appear to be a slight dent near to the position that the rear case is opened. There are some scratches in the same area. It seems that these may have occurred when the watch was being opened by a previous owner. The outer case is a tight fit, and the hinge at the bottom of the cover is in good working order. Inside the rear cover, there are hallmarks confirming the 9c gold status. It bears import marks for London 1920. The case also states that it is Rolex, although it is believed that this is only the outer case and not the movement. There are no markings what so ever on the movement itself. However although reasonably simple it does appear to be in good order throughout.This item does come with a box that is associated with R Bond & Co Darlington. It is possibly original, and in reasonable order. Both the hinge and catch work as expected.

Mainly Gold and Silver men's items. Examples are Pocket watches, Albert Watch chains, Fob's, Sovereigns, and other desk items. I also have some individual items of interest to the wider population, but all with a quality element. For more items please visit our website at www.antiquesatinvicta.co.uk

Other antiques available from antiques at invicta