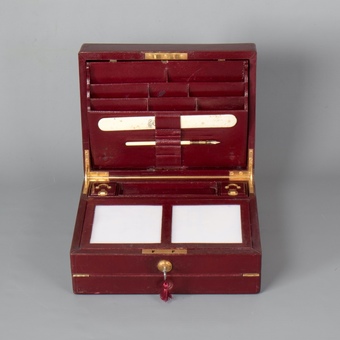 Gerald Mathias Fine Antique Boxes has 86 antiques for sale.
click here to see them all

LEUCHARS & SON, 38 & 39 PICCADILLY, LONDON*
A Very Fine Burgundy Morocco Leather bi-fold Writing Box C1865 by this eminent maker, in three sections with a central handle and a pair of self supporting prop hinges. A rack inside the lid can be made to spring forward for easy access to the stationery. In front there is a pen with a bone handle and bone page turner. Below, a removable caddy holds a pen tray and a matching set comprising an ink bottle and a 'light' box for matches. The horizontal white boards in front can be used with a lead pencil or felt tipped pen, and then easily rubbed out with an eraser or damp cloth. The writing surface with flaps covering two compartments for storage is situated below. All the metal fittings are gilded, and the keyhole of the Bramah lock is moved to the right to open the box. It is fully locked when the key is inserted and turned anti clockwise.
Weight 3.5 kg
Size 32 x 25 x 15 cm
Leuchars
Leuchars was established at 47 Piccadilly, London in 1794 by James Leuchars. In 1820, the business moved to 38 Piccadilly shortly before James Leuchars died in 1823.
Lucy Leuchars, James’ widow, continued the business under the name of L. Leuchars. In 1837, the same year as Queen Victoria came to the throne, the firm was awarded the Royal Warrant for their supply of dressing cases to the royal family.
Expanding to 39 Piccadilly in 1841, the name had now changed to Lucy Leuchars & Son; the ‘Son’ referring to William Leuchars. After Lucy’s death in 1847, William gained sole responsibility for the business. Leuchars exhibited and won prize medals for his dressing cases at the Great Exhibition of 1851 and the International Exhibition of 1862, winning a further silver medal at the International Exposition of 1867 in Paris.
In 1870, under the name of Leuchars & Son, William Leuchars along with his son, also called William, opened a further shop at 2 Rue de la Paix in Paris. When William Sr died in 1871, William Jr took control of the business, later winning a gold medal for their dressing cases at the International Exposition of 1878 in Paris.
In 1884, Leuchars moved their existing manufactory from 31 Gerrard Street, Soho, London to 8 Sherwood Street, Golden Square, London.
William Jr finally agreed to sell the business, along with their Sherwood Street manufactory, to Asprey in 1888. Leuchars continued to trade from their 38 & 39 Piccadilly address until 1902.

Gerald Mathias Fine Antique Boxes has 86 antiques for sale.
click here to see them all