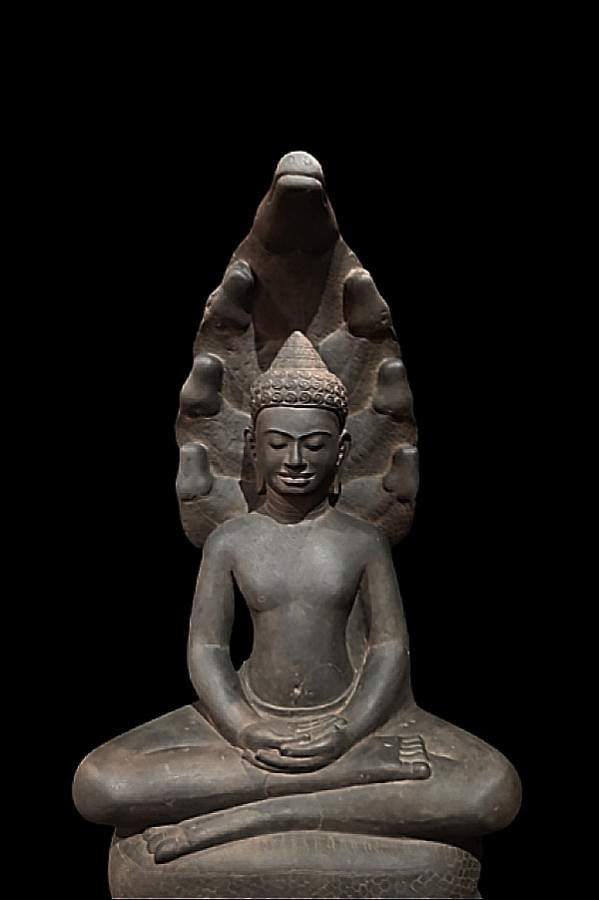 SHANG ANTIQUE PTE LTD has 2 antiques for sale.
click here to see them all

* According to one possible interpretation, this sculpture of Buddha seated in meditation (samadhi) on the naga Mucilinda depicts an episode from the life of Sakyamuni. The latter, plunged in meditation, was about to be swallowed up by the waters of a lake when Mucilinda, who dwelt in the lake, protected him with her multiple heads, shown here above the Buddha figure. The Enlightened One appears to sit enthroned on the serpent’s coiled body. With its hieratic pose inherited from 10th century styles, and its lavish finery, the statue is typical of the Bayon style. The broad face is square-shaped, displaying an unnatural morphology and stylized modelling; the facial mask is bisected by the sharp, unbroken arching line of the eyebrows. This representation of the Buddha protected by the naga is an archetypal Cambodian image which, according to our present state of knowledge, emerged in the early 10th century and later became a choice theme in Angkorian statuary. The theme held, moreover, particular significance in Cambodia where the naga was linked to the foundation myths of the Khmer kingdom.

SHANG ANTIQUE PTE LTD has 2 antiques for sale.
click here to see them all