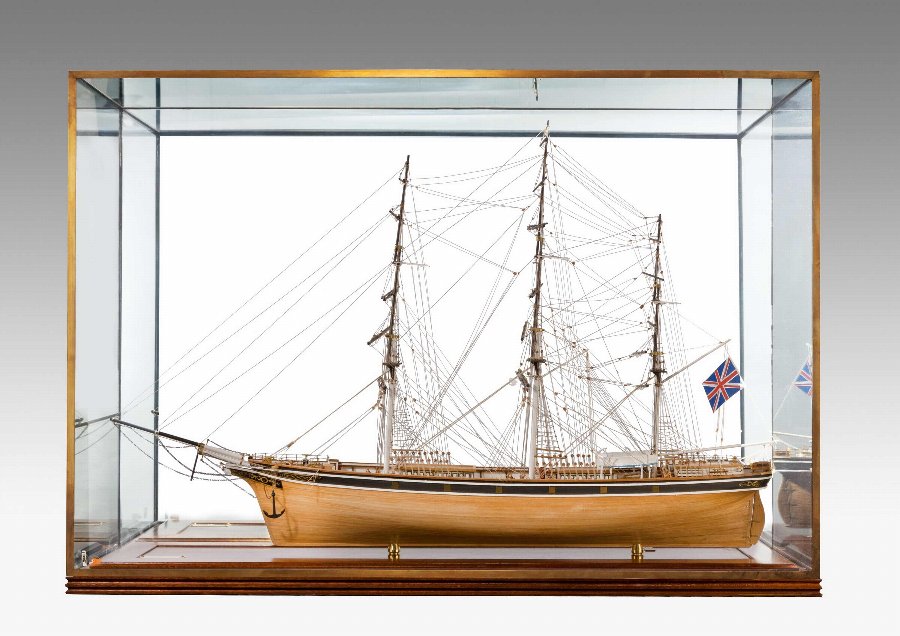 The Cutty Sark was once the most famous of the great clippers, the name ‘clipper’ referring to the fast sailing ships of the nineteenth century that traversed the world’s major trading routes. Commissioned by shipping magnate Jock ‘Whitehat’ Willis, she was built in a Scottish shipyard and launched at Dumbarton in 1869. The Cutty Sark’s unusual name derived from a poem by Robert Burns called ‘Tam O’Shanter.’ In this ode, a hero is chased by some witches, with the fastest one’s revealing shirt being known by the Scots as a cutty sark. The Cutty Sark was a masterpiece, the pinnacle of sailing ship design. Her composite hull of timber and iron was sleek and strong, while her three masts could hold a spread of canvas that propelled the ship at up to 17 knots. As a result, she spent the 1870s speeding across the high seas, establishing a reputation as one of the fastest ships afloat. Not only did her speed translate into prestige, it also translated into profits: the Cutty Sark brought the new tea crop from China, which was incredibly fashionable amongst the tearooms and parlours of Victorian Britain. The first batch of the new tea harvest was highly coveted and thus the first tea cargo to arrive fetched the highest price. Indeed, the annual tea race was a Victorian sensation: the ships’ progress was reported by telegraph and could be followed in the papers. Huge bets were laid on the outcome. The Cutty Sark was never first to the finish line, but she was still one of the fastest. In 1872 she was involved in one of the most famous tea races of all time, against the Thermopylae. The two ships were neck and neck until the Cutty Sark lost her rudder in heavy seas in the Indian Ocean. The accident meant Thermopylae beat her back to London by 7 days, but the Cutty Sark’s performance was nevertheless remarkable. When the ship was launched, it was already the Indian summer of the great sailing ships. The Suez Canal, which had opened the very same year, offered steamships a shorter route to the Far East, slashing approximately two months off their journey time. The winds of the Red Sea and the Mediterranean were not suited to the clippers though. Consequently, the increasing speed and cargo capacity of steamships soon rendered sailing ships unprofitable. By the late 1870s, the Cutty Sark had been pushed out of the tea trade. The Cutty Sark’s future looked bleak: in 1880, she set off on a voyage to Japan to deliver coal for the American Pacific fleet. It was a voyage she never completed. A fight amongst the crew left one man dead, and when the man responsible was allowed to escape by the captain, the rest of the crew mutinied. The ship’s captain, realising his career was ruined, committed suicide by stepping off the ship’s stern into the sea. These dark events gave the Cutty Sark a new reputation amongst sailors, as a ‘hellship’ and a cursed vessel. The ship’s owner, Jock Willis, was determined to turn her fortunes around and so, in 1885, he hired an excellent, albeit eccentric, clipper captain named Richard Woodget. Captain Woodget recognised that the Cutty Sark’s commercial edge now lay in the dangerous wool run to Australia. In this arena the Cutty Sark once again excelled, setting speed records between London and Melbourne and Sydney. For a decade she established her fame through her lightning voyages, but by 1895, she was approaching the end of her life expectancy and had ceased to be profitable. After her heyday, the Cutty Sark was sold to a Portuguese company, who renamed her the Ferreira. The ship spent 25 years transporting cargoes between Portugal, Africa and the Americas, and managed to avoid German U-boats during World War I. In the 1920s, she was purchased by Captain Dowman, a former clipper who remembered the Cutty Sark from her glory days. Dowman renamed her the Cutty Sark and brought her to Falmouth, where she was restored and opened to the public. Upon Dowman’s death in 1936, the ship passed to the navy Training College at Greenhithe to be used as a training ship by British naval cadets. Aboard her, a generation of Royal and Merchant Navy cadets were trained on how to work a sailing ship. Time finally ran out for the Cutty Sark after World War II, when the Training College got a new training ship. Now facing the scrapyard, the Cutty Sark was once again rescued from obscurity. In 1951, the Cutty Sark Society had been established by her admirers. With the support of the public and the Society’s patron, the Duke of Edinburgh, funds were raised to rescue her. In 1954, she was placed in dry dock in Greenwich, London. There she served as a unique example of breathtaking ship design and as a symbol of Britain’s proud maritime heritage. She also became the memorial to the Merchant Navy and its losses in two world wars.Circa: 1970Item Reference = 1320