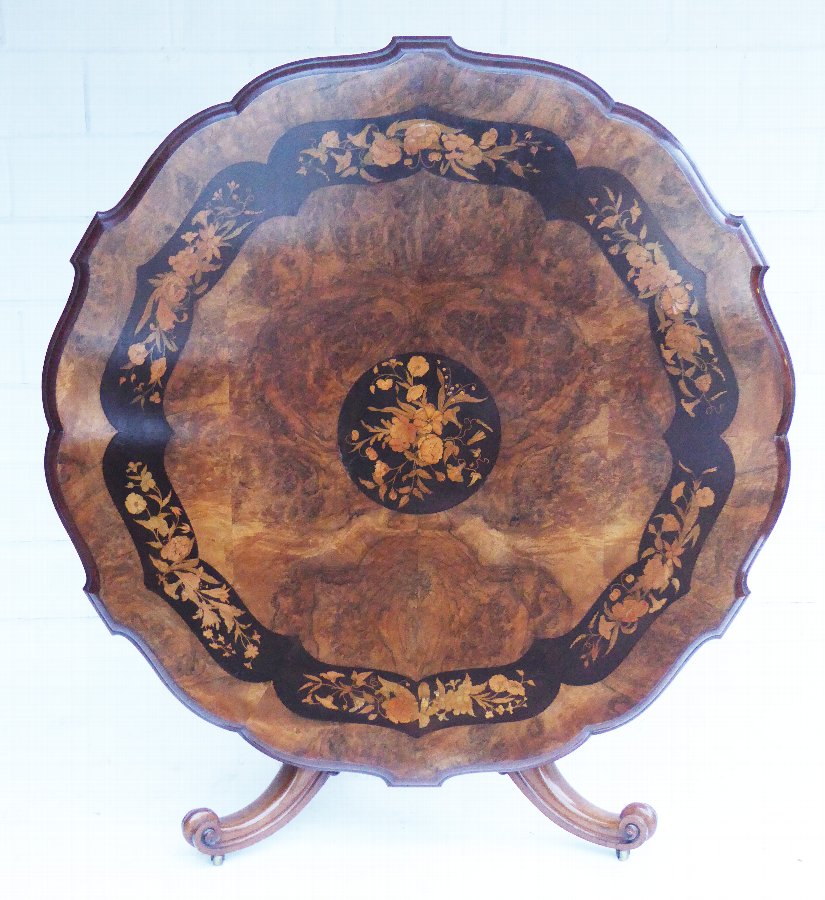 FB Antiques has 73 antiques for sale.
click here to see them all

For sale is a top quality Victorian Burr Walnut and Marquetry Breakfast Table. The table shop is ornately shaped and decorative with very fine floral marquetry inlaid. This is above a marquetry inlaid base, standing on three shaped and carved legs terminating on castors. This table was made by John Kendall & Co. This piece is in very good condition having been completely re-polished by hand.

J Kendall & Co were cabinet makers from Leeds, Yorkshire and who’s craftsmanship is seen to be on a par with that of Gillows. J Kendall stands for John Kendall who was established between 1783 to 1840 and is listed in the G.Beard & C.Gilbert, Dictionary of English Furniture Makers 1660-1840, as an important Leeds maker. J Kendall & Co was eventually taken over by the well known firm of Marsh and Jones, later to be called by their better known name Marsh, Jones and Cribb. From the 1830’s J Kendall & Co adopted the policy of labeling furniture (as illustrated below). Amazingly there are two cabinet makers listed at J Kendall & Co in ca.1837 with the same last name of Shaw working in Leeds, one at Nevile St who was called James Shaw and the other at Ivory St called Joseph Shaw. They may have been family members who were brought up in the same trade. The craftsmanship of these pieces of furniture can be superb with very fine timbers used indeed. They did use simple woods like oak and mahogany but some of the best examples were in rosewood, very often solid rather than veneered like other pieces of the period.Width: 57" Depth: 55" Height: 28.5"

Other antiques available from fb antiques

FB Antiques has 73 antiques for sale.
click here to see them all