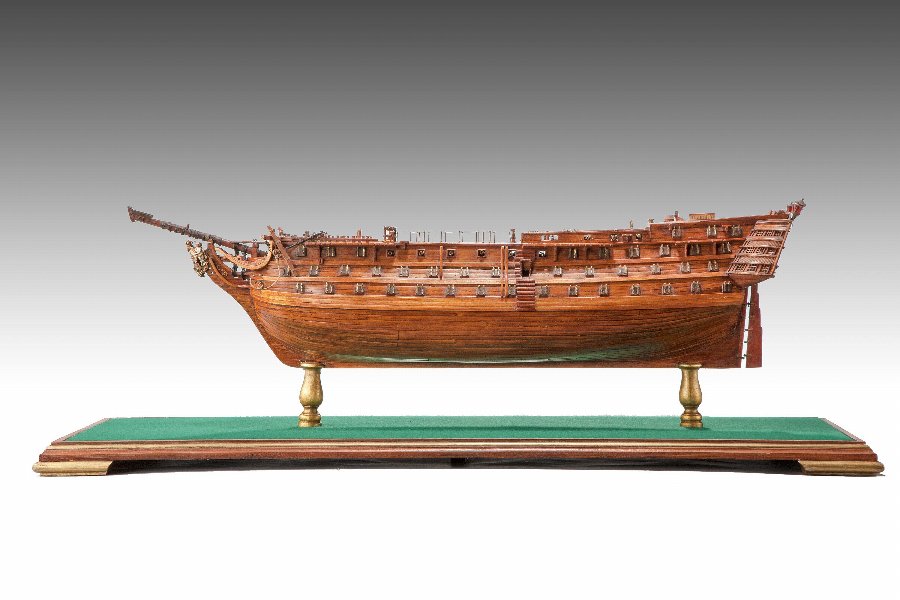 A very fine scale model of Nelson's Flagship 'Victory', with fine English cast gilt bronze details.
HMS Victory is a 104-gun first-rate ship of the line of the Royal Navy, laid down in 1759 and launched in 1765. She is most famous as Lord Nelson's flagship at the Battle of Trafalgar in 1805.
She was also Keppel's flagship at Ushant, Howe's flagship at Cape Spartel and Jervis's flagship at Cape St Vincent. After 1824 she served as a harbour ship.
In 1922 she was moved to a dry dock at Portsmouth, England, and preserved as a museum ship. She is the flagship of the First Sea Lord and is the oldest naval ship still in commission
In December 1758, the commissioner of Chatham Dockyard was instructed to prepare a dry dock for the construction of a new first-rate ship. This was an unusual occurrence at the time as the Royal Navy preferred smaller and more manoeuvrable ships, and it was unusual for more than two to be in commission simultaneously; during the whole of the 18th century only ten were constructed. The outline plans arrived in June 1759 and were based on HMS Royal George which had been launched at Woolwich Dockyard in 1756. The naval architect chosen to design the ship was Sir Thomas Slade who, at the time, was the appointed Surveyor of the Navy. She was designed to carry at least 100 guns and was established with that number of guns; in practice, her armament varied from 104 to 106 guns and carronades. In January 1808 the Victory was reduced to a 98-gun second rate, but was reclassed as a 104-gun first rate in February 1817. The keel was laid on 23 July 1759 in the Old Single Dock (since renamed No. 2 Dock and now Victory Dock), and the name was finally chosen in October 1760. It was to commemorate the Annus Mirabilis, or Year of Victories, of 1759. In that year of the Seven Years' War, land victories had been won at Quebec and Minden and naval battles had been won at Lagos and Quiberon Bay. There were some doubts whether this was a suitable name since the previous first-rate Victory had been lost with all on board in 1744. Once the frame had been constructed, it was normal to cover the ship up and leave it for several months to season. However, the end of the Seven Years' War meant that she remained in this condition for nearly three years, which helped her subsequent longevity. Work restarted in autumn 1763 and she was finally launched on 7 May 1765, having cost £63,176 and 3 shillings[2] (present day £7.06 million)[3] and used around 6000 trees, 90% of which were oak and the remainder elm, pine and fir, as well as a small quantity of Lignum Vitae.
Because there was no immediate use for her, she was placed in ordinary—in reserve, roofed over, dismasted and placed under general maintenance—moored in the River Medway for 13 years until France joined the American War of Independence. In March 1778, John Lindsay was appointed her first captain, but he was transferred to captain HMS Prince George in May 1778 when Admiral the Honourable Augustus Keppel decided to raise his flag in Victory. She was commissioned in May 1778 under the command of Rear Admiral John Campbell (1st Captain) and Captain Jonathan Faulknor (2nd Captain), with the flag of Admiral Keppel. The Victory was armed with smooth bore, cast iron cannon. Initially she carried thirty 42-pounders (19 kg) on her lower deck, twenty-eight 24-pounders (11 kg) on her middle deck, and thirty 12-pounders (5 kg) on her upper deck, together with twelve 6-pounders on her quarterdeck and forecastle. In May 1778, the 42-pounders were replaced by 32-pounders (15 kg), but the 42-pounders were reinstated in April 1779; eventually, in 1803, the 42-pounders were permanently replaced by 32-pounders. In 1782, all the 6-pounders were replaced by 12-pounders. Later, she also carried two carronade guns, firing 68-lb (31 kg) round shot. Only one of the guns exhibited on Victory today is an original from the Battle of Trafalgar. The rest are modern fibreglass replicas. This is necessary because a ship cannot be placed in dry dock with her armaments on board. The weight would damage the structure without the support of sea water.
Circa: 1900