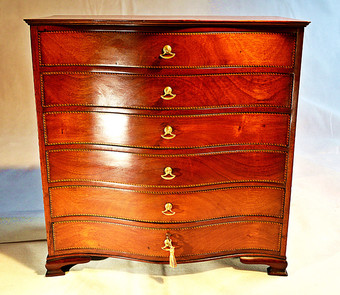 Gatcombe Antiques has 2 antiques for sale.
click here to see them all

An immaculate 19th century Georgian style miniature mahogany serpentine chest of six drawers. Of large proportions (for a miniature piece). Bottom drawer has its own lock and key.

Although it is in the Georgian style and would relate to about 1780, I believe it to have been made in the 19th century by an apprentice to exhibit his acquired skills, which in this case, were quite considerable! The condition of it is simply too good for it to be Georgian and so my guess would be that it was made in the second half of the 19th century. Bhind a small brass escutcheon, the bottom drawer has its original antique lock and key, made my Henry Squire, who specialized in making cabinet locks in 1823 -1892. Each drawer has a central Georgian style, brass axe drop handle. The general construction is typically 19th century, although no expense has been spared. At this time in particular, cheaper timbers were used for parts that were not on show - this apprentice obviously wanted to impress his boss! The back and the base have been made from mahogany and each drawer is entirely constructed from mahogany, with the serpentine drawer fronts veneered in flamed mahogany, with the addition of a rope twist banding around their perimeters. Each drawer has hand made dovetail joints, both to the back and the front. It sits on four very nicely made ogee bracket feet.Lightly cleaned, polished and re-waxed, it is in pristine condition with good colour throughout. Has a few age related marks to let you know that it is old. An excellent practical antique that will always be useful.Mesasurements: 44cm wide, 22 cm deep and just under 45 cm high.

Other antiques available from gatcombe antiques

Gatcombe Antiques has 2 antiques for sale.
click here to see them all